Marszałkowski: Ukraine has exposed the myth of the Russian army (ANALYSIS) 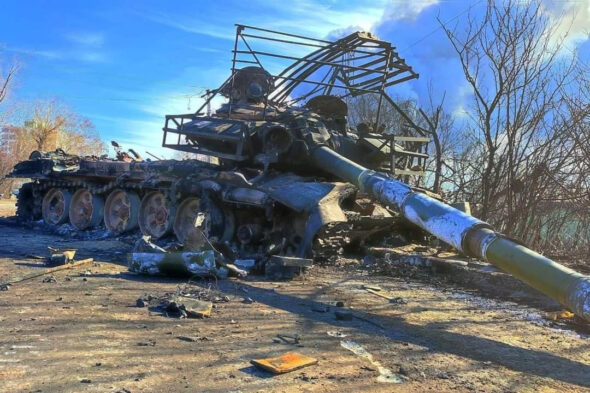 It has been two weeks since Russia attacked Ukraine. The Russians have so far failed to achieve the strategic objectives of their war campaign. However, hostilities continue and their outcome is difficult to predict. What further prospects do the Ukrainians have for defense? – asks Mariusz Marszałkowski, editor BiznesAlert.pl.

According to the head of the US Central Intelligence Agency, the military operation of Russia in Ukraine was to last two days. At that time, the main objectives included seizing Kyiv, Kharkov, Chernichov and Sumy, and unseating the government and president of Ukraine. The Russians hoped that the Ukrainians will not resist with the exception of the front that has been prepared in the Donbas for years. Resistance was supposed to be negligible, and the Russian army was expected to enter Ukrainian cities as liberators from the shackles of the”Kyiv junta”. They were so sure about this that the first convoys that entered Ukraine included Rosgvardia troops, which is a military-police formation managed by the Russian Internal Affairs Ministry. These troops, as well as their equipment, reveal that Russia expected that the only problem after the seizure of Kyiv will be protests. One of the wrecked convoys had shields, helmets and other equipment used to suppress protests.

The fact that the Russians were expecting a “walk in a park” is also laid bare by the fact that in one of the captured field warehouses of the Russian army in Irpen near Kyiv ceremonial uniforms of Russian soldiers were discovered. This indicates a complete lack of understanding of the situation in Ukraine, poor preparation of the invasion by the Russian intelligence (often described by many as exemplary), but also wrong tactical goals, which assumed changing the government in Ukraine to one that would pursue Moscow’s interests.

This plan in itself seemed bold given that the Russians had not amassed forces large enough to occupy such a large country as Ukraine. Without them, the new government would probably, at best, have to flee to its masters shortly after the exit of Russian troops from Ukraine.

What is the secret of the Ukrainian defense?

Before the start of hostilities, as well as in the first hours of the war, many commentators and observers, but also the intelligence services (including American, which as it turned out, are well versed in Ukrainian topics), claimed that the war could last for several hours. The Russians attacked on all fronts simultaneously, and carried out local landing operations (including at Hostomel airport near Kyiv). Despite this, they were not able to occupy major cities (except Kherson in the south), nor were they capable to sufficiently secure the logistics routes on the main transit arteries of Ukraine.

It is a cliche to say that the Russians have the advantage, because it is obvious that they have it on virtually every level of this conflict, both in qualitative and quantitative terms. However, the Russian troops are devoid of morale. Before the conflict broke out, I had written that morale could be a key element in this war. Text below.

But morale isn’t everything. Ukrainian commanders, as well as the entire army, are working very well together. Contrary to popular opinion, the Ukrainians did not stand waiting for the Russians on the border line between the two countries. The main units retreated to a safe distance from the border, or entered the cities. This made it possible for the main tactical units of the Ukrainian army to defend the depths of the country. At the same time, thanks to the formations of territorial defense, the so-called Teroboron, which operate on the territory theoretically occupied by Russia, it is possible to paralyze the enemy supply lines to some extent and on certain sections of the front. As a result, the leading Russian troops advancing on the positions of the Ukrainian army often suffer from supply shortages, which causes the mass abandonment of equipment, even fully operational.

According to Oryxspionkop data, which documents the hardware losses on both sides on the basis of pictures and video recordings, as of March 9, the Russians have already lost more than 950 units of military equipment, of which 380 have been destroyed irrevocably. More than 400 pieces were captured by the Ukrainian army and territorial formations. According to visual confirmation, the Ukrainians at the same time lost 274 pieces of equipment, including almost 100 irretrievably. The calculations made by Oryxspionkop are confirmed by the Russian website LostArmour.info, which tracks hardware losses.

The Ukrainian army has also given the perfect example of the so-called OPSEC, which means it does not publish the movements of its military or even the fights against Russia online. On the one hand, they do not provide the enemy with information about their positions or potential, on the other, they are constructing a narrative that the successes on the battlefield so far have resulted only from the use of irregular light formations, without heavy equipment. Such an image helps Ukrainians to win the sympathy of the international community, which not only translates into the supply of equipment and weapons necessary to continue the defense, but also motivates citizens of foreign countries to stand on the side of heroically defending Ukraine.

This further strikes at the image of the Russian army, which over the years has painted a picture of itself as an invincible opponent, armed with thousands of tanks, artillery, armored vehicles. The clash with Ukraine is often portrayed as the battle between the biblical David against Goliath. However, this is not the best comparison, because Ukraine itself in recent years has also built a large defense potential, including in the field of armored, mechanized troops and artillery.

Also, from Ukraine’s perspective the intelligence support provided by the US and NATO is equally important. The alliance is performing around the clock recon missions in the vicinity of the Polish and Romanian borders with Ukraine. During these missions, communication (as it turned out, often analog and unprotected, conducted on open channels) between Russian troops is intercepted, which gives the Ukrainians a tactical advantage. In addition, the movements of troops and their concentration are monitored. The Ukrainian armed forces have situational awareness and know where a possible attack may take place, or where to prepare an ambush. All this translates into significant losses in the ranks of Russian troops. According to Ukrainian data, which should be approached with due caution, by the 9th of March 12 thousand Russian soldiers were either killed, wounded or captured. Whereas, the data of American and British intelligence says the number of people killed varies from two to four thousand. Assuming that the number of the wounded may be two-three times higher, the Ukrainian estimates may actually be not that far from the truth.

According to the Russian Defense Ministry, from February 24 to March 2, 498 soldiers were killed and 1,597 were wounded. However, it is not known whether these data include losses incurred by Rosgvardia (Ministry of Internal Affairs). It is almost certain, however, that this figure does not take into account the losses suffered by the troops of the so-called People’s Republics of Donetsk and Luhansk.

The Russians have now halted their march a little. Ukrainian and American intelligence reports about the regrouping of Russian troops, replenishing losses and creating a new plan for further attacks. There is no indication that the offensive has stopped for good, and we are most probably dealing with an operational intermission. At the same time there are local clashes, artillery rocket fire from land, sea and air. In the south in the Kherson region, the Rosgvardia is increasing its pacification troops, which are to maintain “peace” in the captured cities and villages. The US intelligence has also reported that Russians are gathering An-3 planes near the border with Ukraine. They want to remodel them into unmanned aircraft and use as decoys. By shooting at the incoming An-2s, Ukrainians would reveal their positions and then be destroyed with the use of aviation and ballistic systems and cruise missiles. This, in turn, would give Russia the desired air superiority and the possibility of an easy assault at Ukrainian troops on the ground.

But does the second stage of the invasion really have to end in the defeat of Ukraine? Not necessarily. Yes, the superiority in quantity and equipment is on the side of Russia, but the Ukrainians do not stand idly by. Cities which may be entered by the Russian forces are preparing for defence. Anti-tank ditches, trenches, dams and barricades are being dug. The people of these cities are learning about using weapons and tactics of urban warfare. Most of the urban centers, except for the besieged Mariupol, still have a connection with the rest of Ukraine. This means that weapons supplied by western countries continue to arrive there. In the west of Ukraine, where, apart from sporadic rocket fire, hostilities are not conducted, training of both the territorial defense forces and the reserve troops fighting in other parts of the country is constantly underway.

There is another aspect that makes it impossible to assume in advance that Ukraine will fall. According to the chief of staff of the armed forces of Ukraine in early March 100 thousand volunteers signed up to the territorial defence troops. In addition, according to the State Border Service of Ukraine from February 24 to March 8, almost 180 thousand people returned to Ukraine, of which 80 percent were men. Most of them returned to join the army and defend their homeland. In addition, president Volodymyr Zelensky issued a decree to establish a foreign legion. Foreigners who want to defend Ukraine can join this formation. According to the Ukrainian Foreign Ministry over 20 thousand people have already registered via a special contact form and Ukrainian embassies. These are people with combat experience, often retired soldiers of special forces and other police or military formations trained to use specialized equipment and weapons. These people can perform combat operations on the front line or act as instructors teaching Ukrainians the use of anti-tank grenade launchers, operation of drones, tactics or shooting. As long as Russia and Belarus do not open a front in the west of Ukraine, further transports with equipment, weapons, fuel or ammunition, as well as foreign volunteers, will be able to freely enter the territory of this country.

In this case time is on Ukraine’s side. From a quick, victorious campaign Russia fell into a bloody conflict that has already cost billions of dollars in destroyed equipment alone. The Kremlin believed in the images from the May 9 parades (Victory Day – ed.), which, as it turns out, had little to do with reality. Many factors are behind the current state of affairs. The fact is that the army, which has been in modernization over the years, on which the Russian budget spends at least USD 50-60 billion every year, is not able to dominate an army, whose budget is less than USD 7 billion dollars, and has been this big only for a few years. Regardless of the final outcome of this war, the myth of the Russian army that has been spun for so many years has been shattered. Russia will want to rebuild it as soon as possible, but economic sanctions imposed by western countries may stand in the way. And the propaganda pictures embellished with the Z-sign will be useless.

Putin has already lost Ukraine. Will he lose Russia?
SECURITY
The Russian army expected to march triumphantly into Kiev, while being cheered on by Ukrainians. However, it was met with fierce resistance, shame […]
More