Materniak: the water situation in Crimea will only get worse (INTERVIEW) 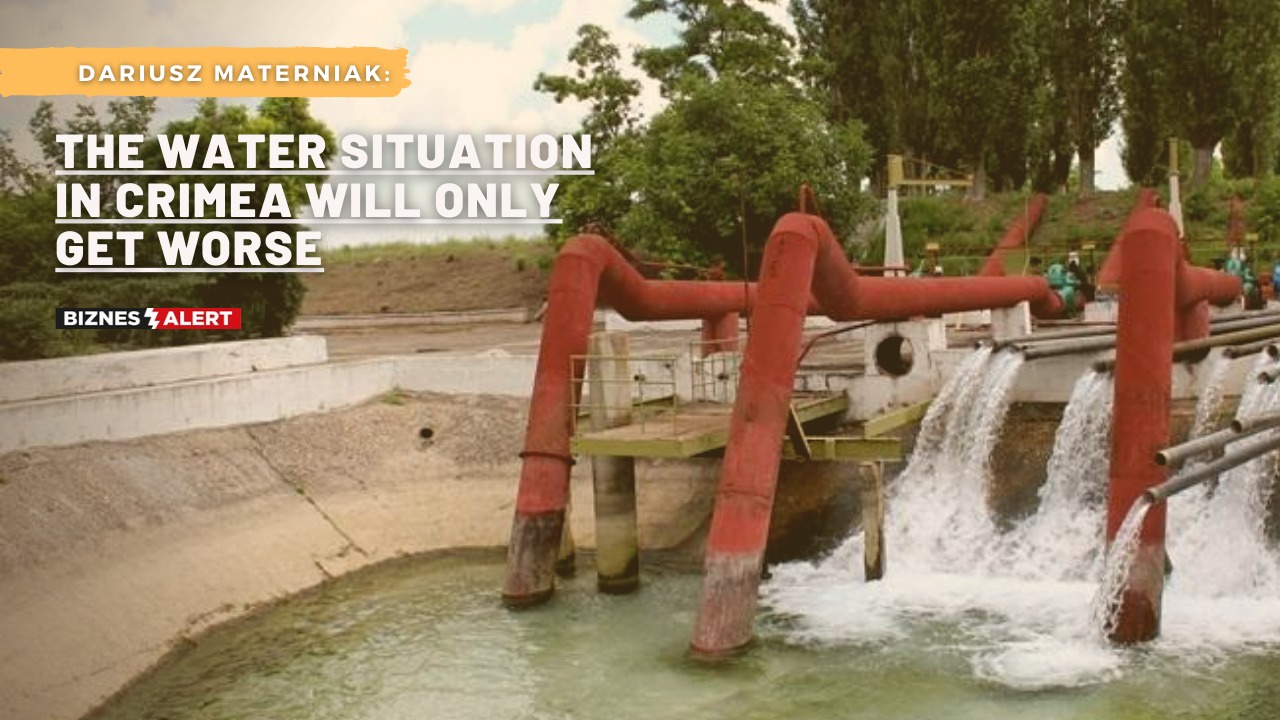 Despite Russia’s efforts, the hydrological situation in Crimea has not improved. This year water shortages in Crimea may be a lot worse – Dariusz Materniak, PhD., editor in chief of the Polish-Ukrainian portal, says in an interview with BiznesAlert.pl.

BiznesAlert.pl: How is the water situation in Crimea today? Were the reserves replenished in the winter?

Dariusz Materniak, PhD.: The situation has improved a little. However, it should be remembered that the past few years, and especially 2019, have been dry. In result, rivers and lakes dry up, an issue the Ukrainian media has reported on in the previous months. This has been happening at, e.g. the Buhaz lake near Sudak, which may disappear soon. At the end of February the local, Russian administration has also informed that the reserves in two big reservoirs – Simferopol and Zahirya – have run out, which happened despite winter precipitation. At the end of February the water level in the first reservoir was only at 7 percent. So in reality we can’t talk about a radical change for the better, not to mention normalizing access to water. This brief improvement was made possible by the weather, but it does not impact the entirety of the situation, which is very difficult. It doesn’t look like things will get better. On the contrary, everything suggests it will get worse.

What are the forecasts for this year? Will there be water shortages just like last year?

It will definitely not get better. Russians are using ad hoc methods to try and provide the water, they are planning to, among others, build a pipeline along the Crimea bridge, but these are not comprehensive solutions. The residents are complaining about water shortages and low quality. Without an agreement with Ukraine, the situation will not improve, and we should remember that until 2014, i.e. before the Russian occupation started, 85 percent of the demand for water had been covered by deliveries from “continental” Ukraine.

You mentioned Russians were taking some steps, what are those?

They are currently drilling artesian wells. This is another ad-hoc measure. The demand for water in Crimea is going up and the wells alone are not capable of meeting it. This will work in the short term, however, in the long run it will have a destructive impact on the ecosystem of the entire peninsula due to the overexploitation of underground waters. There are plans to build a desalination plant and to extract water from the bed of the Azov Sea. All this is extremely expensive and does not guarantee at all that these actions will improve the hydrological situation in Crimea in any way.

You mentioned Ukraine and that the issue in Crimea could be solved thanks to some kind of an agreement between Ukraine and Russia. What are the chances for such a deal? A year ago Zelensky’s administration researched the opinion of the public and it seems it didn’t change anything.

Ukrainian media practically do not give attention to the issue. Of course everybody knows about Crimea’s issue, but it is bundled up with the illegal annexation of the peninsula by Russia. Any news about negotiations with Russia on water deliveries via the North Crimea channel is very rare. This may change a little this year, because of the inauguration of the Crimea Platform, a platform for dialogue on the actions related to de-occupying Crimea. The official inauguration meeting is to take place in August this year. However, the answer to the most important question has not been given – would Russia be interested in some constructive participation in the platform? Without Russia offering a constructive position, which is unlikely because it treats Crimea as one of its federal entities, it will not be possible to solve the issues in Crimea, including the problems with water. Russia’s Foreign Ministry has declared it could take part in talks about water deliveries, but the de-occupation was off the table. Last year, Ukraine’s Prime Minister Denys Shmyhal announced that in case of a humanitarian crisis Ukraine would help the Crimea residents by providing water, however, no specific propositions were made after that declaration. Kiev’s position remains the same – water delivery will be restored after the peninsula is de-occupied.

There was a lot of talk, especially in Ukraine, about the threat of a military conflict. Is this scenario still taken into consideration?

It was about fuelling tension. Russia’s military potential is big enough to go through with such an operation. No doubt this is a possibility from a theoretical point of view. However, two factors are at play here and both discourage Russia from solving the issue this way. First, Russia avoids admitting that it is engaged in military action in Ukraine. While Moscow did own up to conducting a military operation in Crimea, in case of Donbas, the Kremlin is consistent about denying any direct participation in the conflict. When it comes to supplying water and the possible military solution, Russia would have to start a large-scale operation that would be impossible to hide. Second, Crimea’s geographical conditions do not make it possible to carry out an attack from that direction. “Continental” Ukraine is separated from Crimea by a narrow isthmus, easy for Ukraine to defend. Such an operation would involve large losses on both sides that Russia can’t and doesn’t want to agree on. Alternatively one could expect some hybrid activities or diversion, but an open conflict is out of the question. Russia needs to solve the water issue in a different way, and risking new western sanctions almost seven years after the first ones had been introduced is not what it can afford now.

Crimea is drying up under occupation
Environment
Water shortages are affecting the better part of Europe. Poland is also facing droughts with increased frequency. This problem poses a huge threat to […]
More