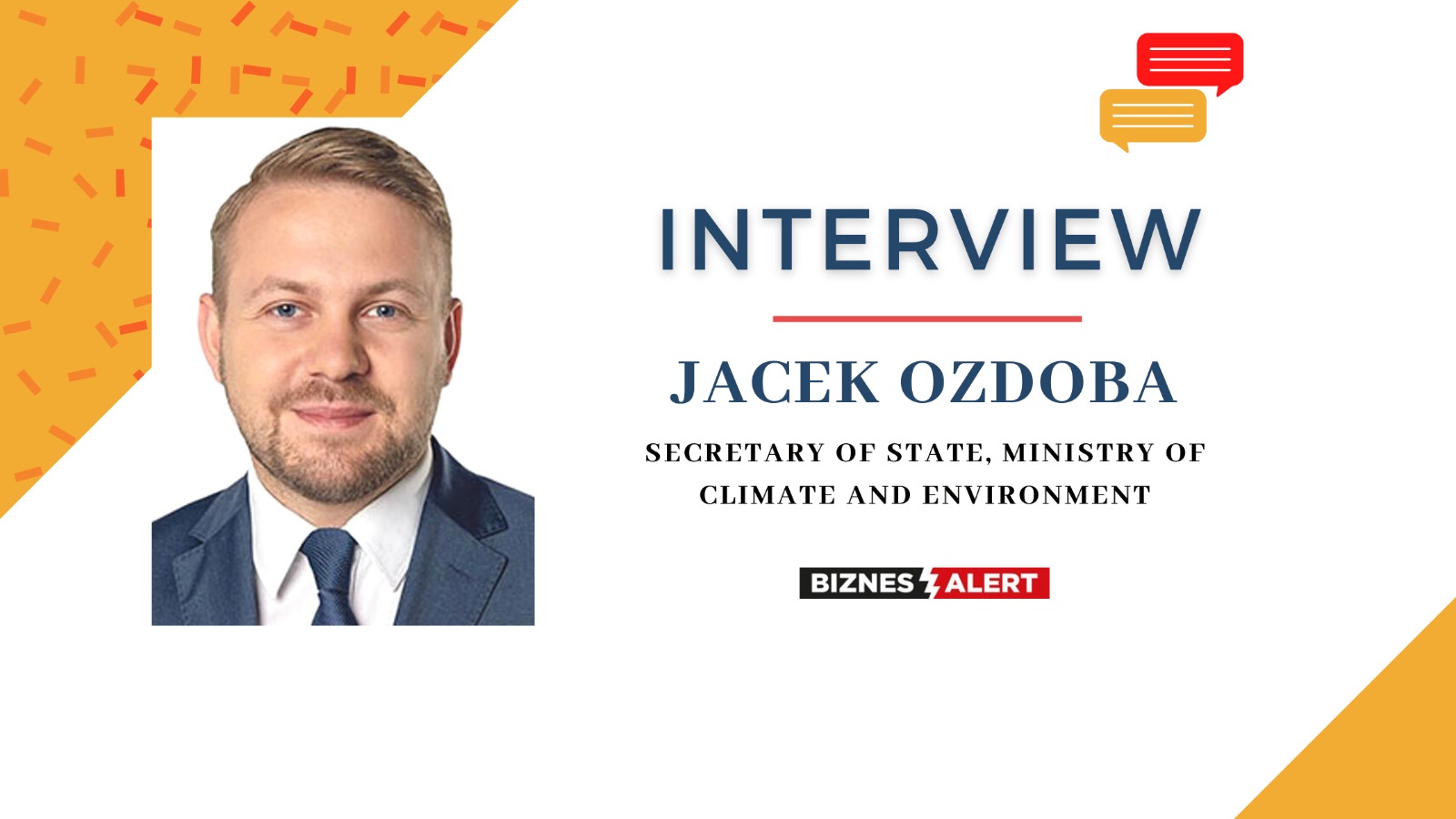 “Waste thermal treatment units go hand in hand with the transition in the heating sector, especially at the local level, where the outdated heating plants need to be replaced with modern cogeneration facilities, which will simultaneously solve the problem of waste that could be turned into energy. The units will meet strict environmental requirements, including the European industrial emissions standards and limits on air pollution,” Jacek Ozdoba Deputy Climate and Environment Minister said in an interview with BiznesAlert.pl.

BiznesAlert.pl: The ministry created a team for promoting the usage of waste in, among others, cogeneration plants which provide heat and power. What is the team’s goal?

Jacek Ozdoba: Yes, on the 12 of October 2020 we established a team for supporting the construction of CHP plants that run on high-calorific municipal waste. We did this to tackle two issues – handling high-calorific municipal waste whose recycling is either unprofitable or impossible, and which cannot be disposed of; and second, the necessity to thoroughly transform heating systems, especially in smaller towns. We noticed there was synergy between these two issues, so we started cooperating with the Ministry of Development Funds and Regional Policy, the National Fund for Environmental Protection and Water Management and the Polish Development Fund, as well as a number of experts versed in waste management and heating, as well as representatives from local governments and business associations.

The team’s main job is to come up with organizational, legal and financial instruments. It will be responsible for analyzing the heating market and the potential of the municipal waste market from the point of view of securing fuel for CHP plants running on high-calorific municipal waste. The team will be tasked with developing a financing model as well. It will also implement investments in building or modernizing municipal waste thermal treatment units, or investments in plants that will use municipal waste to generate both heat and power to towns. Moreover, the team will prepare amendments to regulations to enable investments in waste thermal treatment units, in projects where municipal waste is used to deliver power and heat to the grid, or in the proper functioning of such facilities. The group will also support the Ministry of Climate and Environment in finding the best solutions for solving two challenges that local governments are facing. The first one is about dealing with calorific municipal waste, whose recycling is either impossible or unprofitable, and whose disposal is banned. The second one stems from the necessity of deep modernization of heating systems that are often inefficient, but play the key role in providing good quality, eco- and price-friendly heat to residents.

Does Poland’s Energy Policy by 2040 say anything about the parameters such facilities should have?

Poland’s Energy Policy by 2040 (PEP 2040) does not explicitly refer to the waste thermal treatment units. However, PEP 2040 does include detailed goals for the heating sector, whose implementation opens the possibility of developing CHP plants that run on waste. For instance it says that by 2030, about 1.5 million new households should be added to district heating. It also assumes that out of the heating or cooling systems in which the booked capacity does not exceed 5 MW, in 2030 at least 85 percent will meet the criteria of an energy efficient district heating system (today that figure stands at about 20 percent). It also talks about increasing the participation of renewables in heat generation by at least 1.1 percentage points every year throughout the next decade. According to the National Plan for Energy and Climate, that would increase the expected participation of renewable energy sources in the entire heating sector to at least 28.4 percent in 2030.

Waste thermal treatment units are compatible with transition targets and development of the heating sector, especially at the local level, where it is necessary to replace the obsolete heating sources with new cogeneration facilities, which will also solve the outstanding problem of calorific waste. The social interest is especially important here, as heating will be provided to residents at stable and acceptable prices, with the adherence to the highest standards of environmental protection and elimination of waste that poses a fire risk.

PGE already owns such a facility in Rzeszów, but the plant found it challenging to acquire waste that could be incinerated. Will the team handle this kind of an issue as well?

The problem of ensuring a suitable and stable flow of waste is key when it comes to planning the location of such a facility, and when it comes to determining its capacity in relation to the local potential of generating waste from which energy could be recovered. According to the Central Statistical Office of Poland, about 12.752 million tons of municipal waste was generated in Poland in 2019, out of which 21.5 percent (about 2.75 m tons) should be incinerated to recover energy. The stats also showed that at the end of 2019, Poland still had about 20-27 m tons of waste that could be turned into Refuse Derived Fuel.

These numbers reveal the potential waste has as a fuel, but one should bear in mind its availability is not evenly spread out across the country. The EU Waste Directive will be implemented into the Polish law, together with the targets of the closed circuit economy, which will successfully lead to limiting the amount of produced waste. This factor needs to be included in the plans for developing waste thermal treatment units.

When designing the support mechanism for this kind of facilities, the team will definitely take into consideration the demand for heat from district heating, technical and economic factors that will impact the connection, as well as a multi-year perspective for deliveries of the right kind of waste, with a lot of consideration to optimizing the deliveries and emissions related to transport.

Has the ministry mapped the potential locations for the investments? PGE is considering building such facilities in the location of the existing Bełchatów power plant, which will be closed after 2030.

The team has already held one meeting, during which we decided which analyses were necessary. Those include, among others, defining the most important features/parameters of investments, the financing structure of the projects, the expected type of supervision over the selection of the investment projects, and the location and potential of projects, both when it comes to the input (fuel from waste), as well as with regard to the collection of heat and power. We will also consider how the local governments are able to mobilize themselves to engage in projects that connect the waste and energy sectors. These analyses, as well as the Waste Management Plans for Voivodships, will make it possible to deliver a plan for developing the facilities in the form of a map with potential locations.

The European Commission is proposing the so-called taxonomy, which is a hierarchy of sustainable investments. It talks about emissions at a level of 100 kg/MWh. Can such installations reach this level, so that they are able to apply for support?

The taxonomy includes technical criteria for determining whether a given economic activity offers an important input to mitigating or adapting to climate change, and whether it does not do significant harm to the environment. According to the EU hierarchy for handling waste, their incineration should be the last resort. The EU law says we are allowed to handle 30 percent of waste this way. Whereas, despite the capacity we have, in Poland we only incinerate about 10 percent of the waste. This means, there can be more incineration plants in Poland. Provided that the incineration generates heat and power.

The facilities will also have to meet strict environmental requirements, including the European industry emission norms that include limits on air pollution. Recycling is the priority when it comes to the waste hierarchy. However, the idea of supporting waste thermal treatment units that recover energy in the form of heat and power generated through cogeneration, that the team is working on, pertains to the kind of waste whose recycling is either impossible or unprofitable. According to the waste management hierarchy, it is better to recover the waste’s energy, rather than store it, which is the least desired way to manage it.

Today, over 61 percent of heat in Poland is generated in the cogeneration technology. Waste does not constitute a large portion of fuels used in cogeneration (2.28 percent of all fuels is solid municipal waste, 0.27 is industrial, non-renewable waste), but we are working on steadily increasing that participation.

Another protest of the Youth Climate Strike in Warsaw
Climate Policy Environment
On Friday, May 24, the Warsaw youth will leave the school for the third time in order to fight the passivity of politicians on the progress of […]
More