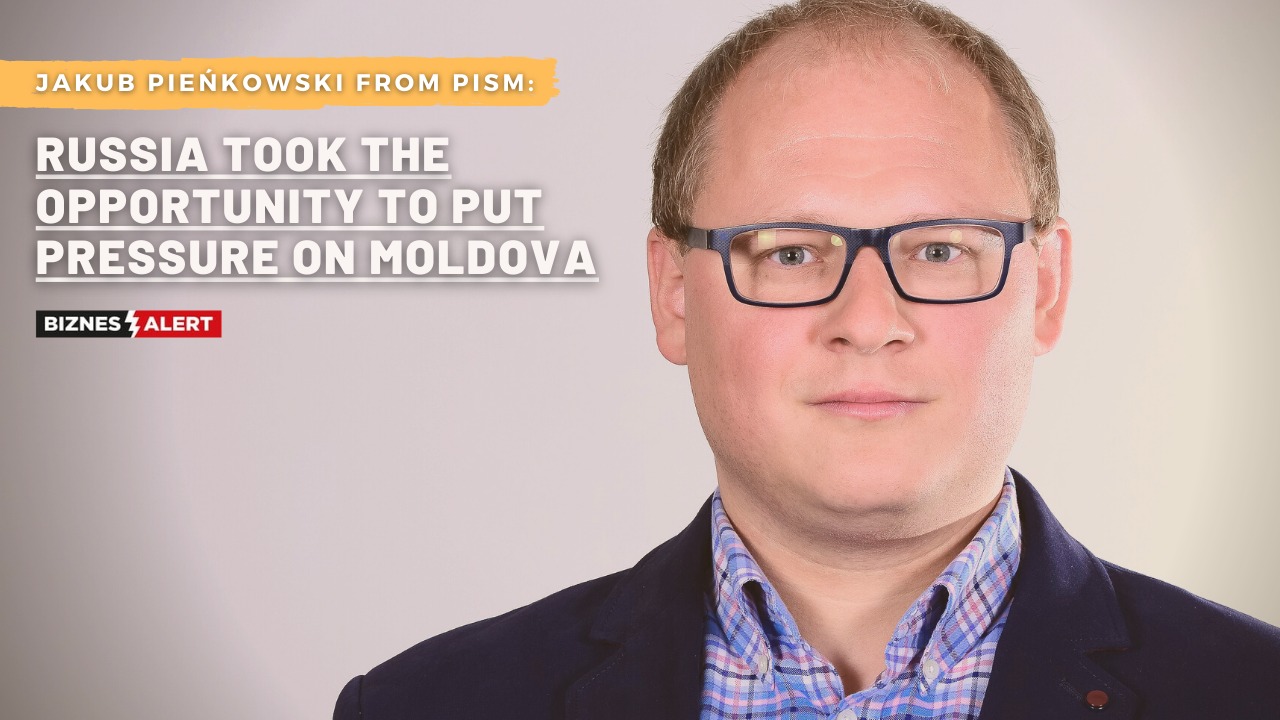 The primary goal of Russia and Gazprom is to lay the groundwork for the launch of the Nord Stream 2 gas pipeline. The gas conflict with Moldova could have had a negative impact on the image of this project, which ultimately prompted Gazprom to sign a new, five-year contract for gas supplies to Moldova – says Jakub Pieńkowski, expert of the Polish Institute of International Affairs, in an interview with BiznesAlert.pl. “It was a good opportunity to put pressure on a country as Moldova,” he adds.

BiznesAlert.pl: What is the origin of the gas crisis in Moldova? Is the word “crisis” correct?

Jakub Pieńkowski: The beginnings of a crisis were certainly there, so on October 22, the Moldovan government introduced a state of emergency due to gas shortages. It looked that gas supplies would have to be limited, including for individual customers. For now, they are limited for industry. However, Moldova’s advantage was that the heating season hadn’t started yet, which eased off the negative impact of this situation. Thanks to the declaration of the state of emergency, it became possible to carry out tenders bypassing bureaucratic mechanisms for gas supplies from suppliers other than Gazprom. This made it possible to use services of companies such as PGNiG and other providers.

When it comes to the origins of the problem, there is a pan-European gas crisis, caused by Russia which is motivated by the need to build positive reception around Nord Stream 2. Nord Stream 2 is supposed to be the cure for high gas prices in Europe, which is to prove that this project is needed. It was Moldova’s bad luck that the end of the current contract coincided with this event. The Moldovan contract expired at the end of September. It was agreed during the negotiations that the contract will be extended to October.

Was the political change in Moldova also the reason for the current state of affairs?

Of course. It was a good opportunity to put pressure on a country like Moldova. The changes that have taken place there in recent months are not what Russia was hoping for, but it is also not the case that Russia is going all the way. Russia’s main goal is to build the atmosphere for the launch of Nord Stream 2. It’s their fundamental goal. Forcing an open confrontation with Moldova, would reveal that the entire problem is political, which would be counterproductive. Only 0.5 percent of Russia’s entire gas export goes to Moldova, so compared to other problems, including with Ukraine or Belarus, it is a secondary or a tertiary battlefield. The Russians are aware of this, so they did not go “hard”. There have been unconfirmed reports that in exchange for a more favorable gas price, Russia tried to coerce Moldova into withdrawing from the agreement on free trade area with the EU. The Moldovan government has denied this, but it is not to be believed entirely.

Why did Gazprom decide to extend this agreement for as many as five years? So far, these contracts have been signed for a period of one year. The previous agreement expired in 2012, it was a four-year agreement. It was then renewed each time for another year. Why, then, has Gazprom relented and pledged to sign an agreement with Moldova for such a long period?

There are a few reasons. The first is, of course, Nord Stream 2. Moldova is not so important as to risk problems regarding gas cooperation with Russia and its image in Europe. Russia is a reliable partner, and when countries such as Poland are sounding the alarm bells about energy crises, they are doing so because they are russophobic. This is the claim that Russia makes. Also, gas prices will soon start to go down. This negotiating window is about to close for the Russians. And the third thing is the attitude of the government in Chisinau, which began to look for alternative gas suppliers. Talks were held in Warsaw, Bucharest, Baku, Berlin. On all fronts. Chisinau has shown that it is ready to negotiate hard and will not back off despite being blackmailed by Gazprom. Moreover, it is very important that without a new gas contract the question of how to deliver gas to the separatist Transnistria, which is actually a Russian protectorate, came up. There is also a certain inequality in terms of gas consumption itself. Moldova as a whole imports about 3 billion cubic meters annually, two billion of which go to Transnistria. Industrial plants and a power plant are located there. The absence of an agreement with Moldova would mean a lack of gas supply for Transnistria itself. Without Transnistria, there would not have been such a quick agreement with Gazprom. At the same time, there was a risk that if Moldova obtained gas from other sources, Transnistria would have to buy it back and pay the market price for it.

Still the risk of a crisis was considerable, and could have had very negative consequences for Moldova…

Yes, Moldova is not only dependent on one supplier, which is Gazprom, but Moldova is dependent on gas. Moldova’s energy sector is based on gas, which could consequently affect its ability to generate electricity for consumers.

Another issue is the debt Moldovagaz owes to Gazprom, which according to Russians is over USD 700 million. Where does this debt come from and does it come from the gas supplies to Transnistria?

Contracts for gas supplies are signed not by the government of Moldova, but by Moldovagaz. This company is 50 percent + 1 share owned by Gazprom, 35 percent belongs to the government in Chisinau, and 13 percent to the unrecognized government in Tiraspol. As regards the bills for the supplied gas, in the past it was possible to negotiate splitting them depending on the consumption. What is delivered to Transnistria, for which Transnistria does not pay, is a kind of Russian subsidy, is accumulated in debt, which today amounts to about USD 8 billion. This issue is not relevant now. It may become crucial if Transnistria is ever to be reintegrated into Moldova. Russia would then have a powerful financial bargaining chip. As for the debt for gas, which is attributed to Moldova, it is USD 433 million, including interest and penalties it is USD 709 million. For a country whose annual budget is USD 2.5 billion, this is a huge amount. Moldova insists on carrying out an audit of this debt. Is it really as high as Gazprom claims.

What can the European Union do in the face of such crises?

The EU has announced that it would provide 60 million in emergency aid to alleviate the effects of the crisis. The EU hoped that the parties would finally come to an agreement. It has also offered strong political support, which has led to a more assertive approach in the talks with Gazprom and forced Russians to make some concessions. Now that Moldova has a few years of peace, the EU will continue to support projects to diversify gas supplies to the Republic. There are prospects for this. The certification of the pipeline from Romania -Jassy-Ungheni-Chisinau, which is able to supply enough gas to meet the needs of Moldova without Transnistria, has just been completed.

Russia used gas as a weapon against Moldova. This recidivism requires a European response
GAS SECURITY
The homeopathic gas supply organized by Poles and Ukrainians to Moldova, which is suffering from shortages, is only a band-aid solution. Putin used […]
More