Russia is expanding its Baltic Fleet 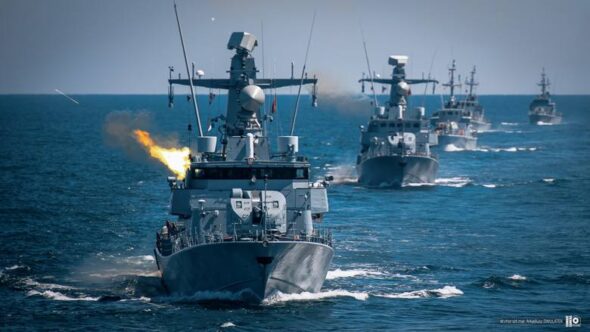 As little as a decade ago there was little that differentiated the Baltic Fleet from the Polish Navy. Today the power of the Russian fleet over Poland’s capabilities is growing significantly. Russians are steadily pursuing their goals, whereas we are still talking – Mariusz Marszałkowski, editor at BiznesAlert.pl, writes.

The Baltic Fleet is one of the five operational-strategic associations of the Russian Navy. Despite its name, the association includes not just the navy, but also the air force and ground troops, but in the article I will focus only on its marine aspect.
The Baltic Fleet is stationed at three Baltic harbors – Baltiysk in the Kaliningrad district, which is the Fleet’s main base, Kronstadt and Lomonosov in the Lenningrad district. The Fleet is part of the Western Military District.

According to data from RussianShips.info, currently the Fleet has 54 military vessels, including the project 966A Nastoyashiy destroyer, two project 11540 Neustrashimy frigates, and Yaroslav Mudry, four missile corvettes project 20380 Steregushchiy, three corvettes project 22800 Karakurt, and two corvettes project 21631 Buyan-M. All of the above corvettes are equipped with Kalibr missiles capable of attacking onshore targets 1500 km away. In the coming years the Baltic Fleet will be expanded by at least 5 Karakurts and at least three new submarines.

Modernization of Russia’s Navy in the Baltic

For years the Baltic Fleet has been considered one of the most technologically backward parts of the Russian Navy, which in and of itself is under-invested. By the way, this issue was one of the arguments raised by the opponents of modernizing of the Polish Navy, which was prevalent in the first decade of the 21st century. Back then Russia’s Navy in the Baltic was not that different from Poland’s. Both were under-invested and lacked feasible modernization projects. However, the situation at our eastern border has started to change in the beginning of the second decade of the 21st century. Since 2010, 16 vessels were added to the Baltic Fleet, including corvettes, small-size missile ships, assault ships and minesweepers. The number of new vessels would have been bigger, if it wasn’t for the annexation of Crimea and the war in eastern Ukraine, which changed the modernization priorities of the Russian Navy.

Since 2014 the pace of upgrading the Black Sea Fleet has picked up, as it projects power on the southern reservoir, the so-called “warm sea”. After 2014, the Black Sea Fleet was expanded by the project 11356 Buriewestnik frigates, which had been commissioned in 2011 (three out of six were supplied, because of issues with engines that came from Ukraine, two unfinished vessels were sold to India, one unfinished frigate is waiting for a Russian turbine to be designed), six submarines project 636.3, four ships project 21631 Buyan-M (formally six, but two of them were moved to the Baltic Fleet) and over a dozen other ships of various types dedicated to various tasks.

The main job of the Baltic Fleet is to maintain Russia’s military dominance in the Baltic Sea. This is done through the navy, the armed forces and the airforce. The ships stationed at the Baltiysk harbor participate in activities not only in the Baltic Sea, but also in the Mediterranean Sea, where they take part in missions as part of Russian Navy’s rotational missions. Additionally, frigates, e.g. Yaroslav Mudry regularly conduct exercises with, among others, the Indian, Pakistani and Iranian fleets.

In recent years the Baltic Fleet has been actively participating in Russia’s energy projects in the Baltic. Hydrographic survey ships were engaged in setting the route for the Nord Stream 1 and 2 gas pipelines, whereas anti-mine vessels took part in trawling operations, mostly around the Gulf of Finland, before the construction of the gas pipelines started. The fleet itself is also to participate in the protection of the installations down the road “against the possible provocations” which was admitted by Mikhail Popov, the first Deputy Secretary of the Security Council of the Russian Federation.

What will this protection look like? The ships may regularly patrol the area along the pipelines, both above the surface and under water. It is possible that early on this had already taken place under the cover of surveillance or research works, that were pursued in the vicinity of the laid pipes. It is worth pointing out that the Baltic Fleet is still not capable of fully completing such tasks. In the Baltic, Russia’s potential is still too small to be a hegemon in the area. However, the example of the Black Sea shows that in less than 6 years Russians were able to practically remake their entire surface and underwater fleet of vessels from frigates, corvettes to submarines, not even counting accompanying vessels.

Russia’s modus operandi for Poland? No.

Russia’s Baltic Fleet is slowly growing in strength, which cannot be said about the Polish Navy, which is losing its meager military potential each year. Russians are consistent and methodical about introducing new vessels to their fleets, but still experience delays and issues. According to some opinions about the modernization of the Baltic Fleet, the process is missing large surface vessels in the frigate class, and the suggestion is that Poland’s modernization plan should follow in these footsteps. However, the fact that there aren’t any large surface vessels in the Baltic Fleet doesn’t mean Russia gave up on their potential on purpose. Actually, this there are a few reasons for this.

First, Russians have themselves problems with acquiring vessels in this class for their own operational-strategic associations, which, contrary to Poland, they have five (Northern, Baltic, Black Sea, Pacific, Caspian Fleet). The vessels that are eventually produced, in the first place go to those areas where their presence is necessary due to the tasks that they need to fulfill and the operational conditions (Arctic, the Pacific).

Once the needs of those theaters are met, the next place where the new ships will go is the Baltic. The second reason for the investments in smaller ships is the fact that Kaliningrad already has a strong anti-aircraft defence. The Russian vessels that are present on the Baltic, especially close to the Kaliningrad shores, are under the umbrella of a comprehensive anti-aircraft system that has a short-, mid-, and long-range. Therefore, their primary job is not to provide anti-aircraft defence for onshore installations, which is different in comparison to Poland, which does not have a comprehensive anti-aircraft and anti-missile defence for its onshore infrastructure, not to mention ships at sea. The situation on the Black Sea looks different, as despite the fact that the occupied Crimea is saturated with anti-aircraft defence systems, Russians continue to invest in all kinds of vessels with destroyers and frigates leading the way.

The third reason is the Baltic’s place in a wider, geographical perspective. In case of a crisis or a war, Russians will not have access to the Baltic Sea via the Danish straits. So to solve this issue they are investing in smaller vessels that are rather light and do not have a deep draught. In case of a crisis such vessels as the Buyan-M or Karakurt corvettes may be moved to the Baltic from the Caspian or the Azov Seas via, e.g. Russia’s inland waterways. This approach allows Russia to be flexible about managing its fleet and resources across various theaters of activity without the risk of losing vessels or being exposed too early. It is worth pointing out that such scenarios were practiced in, among others, April 2020 when two Buyan-M vessels were moved from the Caspian Sea to the Baltic to take part in the Navy parade in Petersburg organized to celebrate Victory Day.

The specificity of the Baltic Fleet is different from the Polish Navy. This is the reason why the way and the pace of modernization are different. While Poles are talking whether there is even a point to having a Navy, Russians are quietly and consistently pursuing their goals. It is worth following their example, but there is no point in copying their solutions as they stem from different circumstances.

Poland is turning its back on the Baltic
SECURITY
In recent years, Poland has opened to the Baltic Sea in unprecedented ways. However, no political force that was in power after 1989 has treated the […]
More