Russians are setting the stage to justify their upcoming provocations 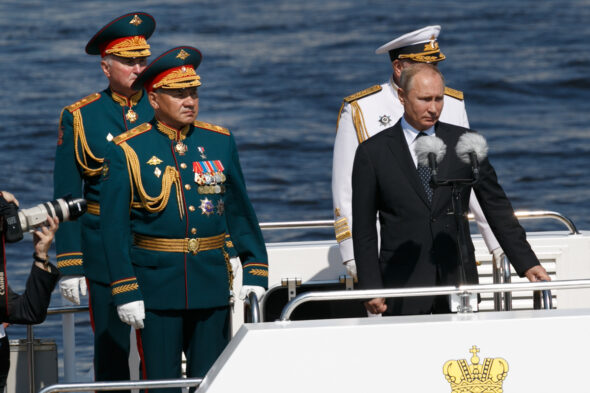 On the 1st of April 2021 the Interfax agency published a statement by Andrey Minin, head of the local Nord Stream 2 AG branch in Kingisepp in the district of Leningrad, who complained about the activities of “external entities” that threaten the security of the Nord Stream 2 construction. What is Russia up to and did anything outside the usual indeed happen in Denmark’s exclusive economic zone where Nord Stream 2 is being built? – Mariusz Marszałkowski, editor at BiznesAlert.pl, explains.

The Nord Stream 2 AG company with its seat in Switzerland’s Zug, confirmed Minin’s claim in a comment for Reuters.

Russians believe these actions are provocative and are a planned attempt at stopping the construction of the gas pipeline by force. The pipe, which runs on the Baltic seabed, is completed at 95 percent, which means the investor needs to lay fewer than 120 km out of the 2.460 km of pipes.

Of course these allegations are absurd, even when one examines the photographs and recordings from the alleged incidents published on the Russian Telegram social network.

The pictures and recordings show that none of the warships that were in the area close to the vessels engaged in the construction, were in direct proximity or posed a threat to the construction progress. The guidelines implemented by the Danish Marine Agency say that there has to be a 1.5 mile exclusion circle around the pipe laying Fortuna barge, where no fishing or any other marine activities can take place. It is worth pointing out that the pictures were taken with the usage of binoculars, so they do not reflect the real distance from the ship.

The time at which the pictures were taken and the circumstances surrounding the appearance of the military vessels in that area are questionable as well.

The published pictures show that apart from the Polish Navy (at least two minelayer-landing ships – ORP Kraków and ORP Poznań), other vessels were in the vicinity of the gas pipeline construction area as well, including two Bundesmarine K130 corvettes, Royal Navy’s oil tanker of the Tide type and an unidentified submarine.

The armada’s composition may suggest that the vessels were conducting a joint exercise, or were on their way to a marine test site. According to data from AIS, only a few days earlier ORP Kraków was on a military test site near Darłowo, over 50 nautical miles from the Nord Stream 2 construction area.

Also, Russians complaining about the “provocatively low and frequent flights of a Polish anti-submarine warfare plane (ASW) M28 1RM Bis” is completely absurd. The available footage shows that the plane did not fly directly over the vessels engaged in the construction, and the flight altitude and speed were not a threat to any ships at sea.

So why did it fly in that area? The construction of the Nord Stream 2 pipeline in the Danish EEZ is taking place a few kilometers away from its border with the Polish EEZ. Considering the fact that over a dozen vessels are engaged in the construction, there is a risk of, among others, a marine or environmental disaster. The history of the Nord Stream 2 project includes incidents where oil and lubricants leaked from the vessels engaged in the construction. Regular marine patrols and aerial photographs may quickly and efficiently identify the culprit behind a potential disaster. Moreover, the fact that the plane’s ASW purpose was stressed is a huge overinterpretation on Russia’s part. First and foremost, the plane is a patrol unit and the ASW function is only one of the tasks it is capable of handling. Probably the purpose of calling it an ASW aircraft is to cause a psychological impact among Russian-speaking readers.

Poland’s Armed Forces Operational Command has already commented on the allegations made by Russia.

“The Polish Nay is not conducting any provocations and is carrying out its statutory activities in line with the international regulations. The M28-B Bryza aircrafts regularly conduct patrol and reconnaissance flights in the Baltic Sea area,” the Operational Command tweeted.

Russians have also alleged that Polish fishing boats were “provoking” in the area as well. The published monitoring footage from the Vladislav Strizhov icebreaker shows a vessel that looks like a fishing boat approaching and ramming into the Russians. Apart from the video, which is a little over 10 second long, there are no other recordings that could explain the course of this accident in detail. Either way it is preposterous to accuse fishermen of sabotaging the pipe-laying with a 19-meters long fishing boat whose gross tonnage is 151 tons. To compare – the alleged “victim” – Vladislav Strizhov is 100 meters long and has a gross tonnage of 5.871 tons.

Moreover, it would be difficult to imagine a private owner of a fishing boat who puts at risk his property and crew to collide with the Russian vessel.

What is Russia’s goal?

There are two points here that are interesting. The first one pertains to the person who was behind releasing the news about the alleged incidents. Director Minin is employed by a small, local branch of Nord Stream 2 AG in the town of Kingisepp (formerly Yamburg) in the Leningrad district that is close to the border with Estonia. The branch was responsible for, among others, preparing the construction of the gas pipeline in Russia and the entrance of both of the lines into the Baltic Sea. Previously this official has never made any public statements and, considering his responsibilities, it is strange that he is now revealing information about occurrences in the Danish EEZ. Beforehand the Nord Stream 2 AG company did not report on any incidents, even though according to Minin they had been taking place since the construction was resumed, and got worse in February.
The other interesting fact is that only incidents in which Polish marine vessels and aircrafts are reported on. This is in spite of the fact that, as I mentioned earlier, the pictures show vessels from at least two other NATO states as well.

This may reveal what is the actual purpose of releasing this information to the media.

It is worth pointing out that according to the schedule the construction of the marine section of the Baltic Pipe is to start it the middle of this year. The pipe is to cross the four lines of Russia’s underwater Baltic gas pipelines – Nord Stream and Nord Stream 2. According to the schedule revealed by the Danish Maritime Authority, the Nord Stream 2 section in the Danish EEZ will be completed in September 2021. This means Russians are already setting the stage for launching their own provocation. Putting the Polish participation in the “harassment” on the NS2 construction site in the limelight clearly shows that the goal is to present Poland as a state that is aggressive and completely dependent on the US.

It has become fashionable among the Russian media to push the narrative that the US is behind Poland’s actions. This is accompanied by open triumphalism that despite the sanctions, Russia is able to continue building the gas pipeline on her own.

It should also be remembered that apart from the Baltic Pipe, the Harmony Link construction will start soon as well. The link will connect Poland’s and Lithuania’s electricity grids. It will run from Klaipeda to Władysławowo, bypassing the Russian EEZ. It cannot be ruled out that this endeavor will be interrupted by provocations from Russia’s Baltic Fleet.

Russians may also want to have a pretext to increase the presence of the Baltic Fleet on the route of the Nord Stream gas pipelines. On numerous occasions Russian officials have stressed that the Russian Navy will guard the gas pipeline against “hostile actions”. However, until now it had no real reason to send ships to the Baltic to regularly patrol the gas pipeline’s routes. Now, such a decision could be made because of “Polish provocations”.

The pot calling the kettle black

Russia’s reaction is in a way funny, because she herself frequently does not respect the freedom of navigation of other ships. This happened, for instance when Russians seized Ukrainian fishing boats and tug vessels in 2019 when they were passing from the Black Sea to the Azov Sea. Back then true marine hooliganism was taking place, which involved ramming into Ukrainian vessels.

The same pertains to the behavior of Russian aircrafts. There are dozens of videos on the internet from various western states that document how unprofessionally and dangerously Russia’s military air force intercepts their planes. The same goes for ships on the international waters of, e.g. the Black Sea. Back in 2016 the Russian propaganda machine was gloating at the Su-24 fighters making low-altitude passes over the Navy destroyer USS Donald Cook.

Stępień: Market is interested in the Baltic Pipe (interview)
Energy Nord Stream 2
In an interview with BiznesAlert.pl, Tomasz Stępień Gaz-System’s President of the Management Board talks about the progress of the Baltic […]
More