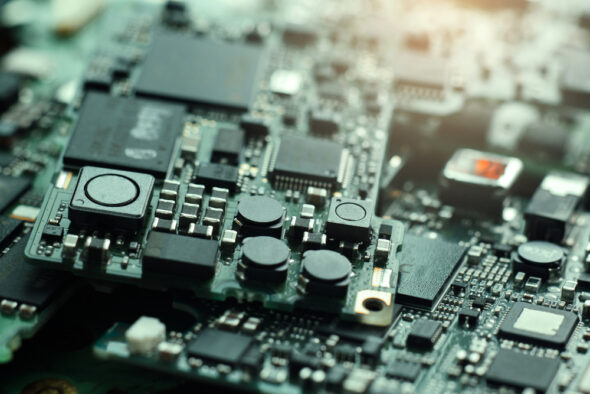 Beijing wants to reduce its dependence on the West in yet another sector of the economy. This time the fight is about semiconductors, which are an essential part of everyday life. Recently the Chinese have taken steps to become the world leader in semiconductor production. However, Taiwan is also caught in the eye of the storm, as it doesn’t want to lose its position – writes Jędrzej Stachura, editor at BiznesAlert.pl.

Semiconductors, that is, materials that exhibit insulator properties (under certain conditions), are in almost all electrical devices that we use on a daily basis. They are part of both home appliances and more advanced systems in cars or even military aircrafts.

Since 2020, chipmakers in China have been cutting themselves off from American semiconductor equipment. China’s biggest hope for coming on top in this race is the Semiconductor Manufacturing International Corporation (SMIC). This leading supplier in the country plans to build a new production hall, which will become the largest of its kind in China, used for products other than digital memory. Experts stress that this could be an important step to reduce pressure on the supply chain of semiconductors.

The Chinese and their new strategy could challenge the Taiwan Semiconductor Manufacturing Company (TSMC), which has the world’s largest plant with a state-of-the-art semiconductor foundry for leading technology companies. The new SMIC plant will be built on the outskirts of Shanghai, and its cost is expected to reach USD 8.87 billion. China wants to create a domestic chip manufacturing industry, and to do that it cannot rely on foundries in other countries. This is very important, because the United States can block the supply of modern chips to Chinese manufacturers.

Another reason behind the expansion is the high demand for chips. The factory is expected to reduce delays in the production of cars and smartphones, but this will take time. The start of production won’t immediately solve the problem. The plant will be able to manufacture one hundred thousand 12-inch silicon wafers per month, needed for the production of chips, solar cells and electromechanical microcircuits.

In this regard, the Republic of China in Taiwan is on the so-called pole position, because it has almost a monopoly on the production of semiconductors. In recent years, China has tried to achieve self-sufficiency in semiconductor technology, while Taiwan has dominated the global chip industry, and accounts for about 75 percent of the global chip production. According to experts, Taiwan should strive to maintain the global supply chain and its market position. It can do this, in particular, by extending its reach abroad, i.e. by cooperating with other partners, such as the European Union.

The coronavirus pandemic, which caused a shortage of semiconductors, highlighted Taiwan’s key position and revealed the global supply chain dependence. Some countries have even tried to develop their own semiconductor technology, or invited TSMC to set up foundries. However, Taiwan doesn’t seem to be convinced that such a step would improve its geopolitical position.

In September last year the US Department of Commerce added SMIC to a list of entities to which unlicensed export of American technology is prohibited. SMIC CEO Zhao Haijun confirmed that this had made it difficult for the company to develop more advanced technologies. The Chinese announced that they were looking for alternative solutions, while continuing talks with the US government.

The chips, which will be manufactured at the new SMIC factory, will use a 28 nanometer technology. The plant will produce wi-fi chips, image converters, microcontrollers, etc. This directly pits SMIC against TSMC, which announced it would expand production to 28 nm in Nanjing, China. This move is designed to meet local demand. At the same time, TSMC has announced that it had produced 12 million 12-inch wafers in 2020, and expected a 4 percent increase this year.

It is no secret that the Donald Trump administration tried to restrict China’s access to the production and purchase of semiconductor chips. Taiwan is caught in the crossfire of this technology war. Since the United States prohibits trade with Huawei, TSMC cannot do business with one of its most important customers. Until the Trump administration announced these restrictions, the Taiwanese company had no problems cooperating with the Chinese and Americans.

The example of Taiwan shows how the technology war between the great powers, that is, China and the United States, may unfold. Recently, TSMC announced that it would build a new plant in Arizona, because locally it has to deal with Chinese companies trying to pick up workers and local hackers attacking its systems in search of trade secrets.

Taiwan’s chips drive the world’s technology, so the rivalry between the US and China, which could potentially lead to a war, has a technological aspect as well. Over the past year, tensions have been rising around Taiwan, with China even conducting military exercises near the island, which has alarmed the West. However, the president of TSMC has called on all parties to remain calm. “No one wants a war over Taiwan, because no one wants to disrupt the key global supply chain of semiconductors,” Mark Liu said.

The CEO believes that the coronavirus pandemic has sufficiently devastated the world economy and Taiwan can sleep peacefully. According to him, there will be no invasion by China, because everyone wants a peaceful Taiwan Strait. “This benefits all countries, also because of the supply chain of semiconductors in Taiwan, which no one wants to disrupt,” he said.

However, the battle for technological dominance isn’t slowing down, and there is no doubt that China and the United States will continue to work to undermine each other’s plans and growth. One example of what lies ahead is the fact that such a major factory as TSMC has been forced to speak for one of the sides.

Huawei’s nightmare continues because of US sanctions
Cybersecurity SECURITY
Already in January it could be expected that this won’t be an easy year for Huawei. At that time the Chinese telecoms tycoon was facing […]
More