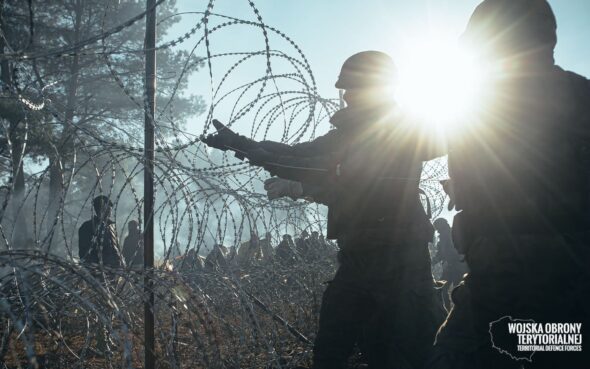 The actions of the Russian Federation towards the countries of Central and Eastern Europe, carried out in order to consolidate its influence, also have a military dimension, and Ukraine remains the focal point of this pressure. This will not change in the near future – writes Dariusz Materniak, PhD., contributor to BiznesAlert.pl.

The army as a tool of domination

Military power has been and still is an important part of Russia’s foreign policy, especially when it comes to the countries of the so-called near abroad, but also states located much further away. The war with Georgia in 2008 was a turning point in Russian policy in this respect. Although victorious, it exposed a number of weaknesses in the Russian army at the time. However, this conflict became the driver behind organizational changes in the Russian Armed Forces. Right before the armed conflict with Ukraine in 2014, the Russian army presented a completely different, much higher level of efficiency in terms of command, situational awareness of the battlefield, and had much more modern weapons and equipment. These assets allowed Russia to take military action not only in the east of Ukraine, but also in Syria where it propped up the president of this country, Bashar al-Assad. This is one of the reasons why after a few years in isolation, Moscow managed to rebuild its position as a world power, and successfully convinced the rest of the world it was impossible to solve key international problems without its participation.

Subsequent military ventures carried out by Moscow, such as the Zapad-17 military exercises, which periodically take place in Belarus, have been used to test in action the newly established tactical and operational compounds – those formed in the southern and western military districts of the division (3, 144 and 150), as well as the army, including the 1st Guards Tank Army, reactivated in November 2014. The character of the latter formation is exceptionally offensive, and so it is being prepared to fight a guerrilla-style war in the western strategic direction: its goal is to take actions against Ukraine or NATO countries.

It is also worth paying attention to the role of Belarus in Russia’s military and political strategy. Although at present the permanent Russian military presence on the territory of this country is symbolic (the joint exercises usually have a relatively small scale and duration), this state of affairs can change very quickly if Moscow decides to dramatically increase its military presence there. The sovereignty of the Belarusian government, especially when it comes to military issues, is increasingly illusory – and since at least the last few years, Belarus should be considered an outpost of Russia’s Western Military District, which is a potential position for taking offensive actions against Ukraine or NATO.

As of 2014, Ukraine has been the main target of Russian military pressure. The operation carried out by the Russian special services in the first half of 2014 under the name “Russian Spring” was aimed at actually taking control of the eastern and southern regions of Ukraine, including Kharkov, Dnipropetrovsk, Zaporozhye and Odessa. As is well known, the campaign was successful only in parts of Donbas, including Donetsk and Luhansk. The Ukrainian national guard and special forces conducted an operation that thwarted the attempts to artificially implement separatism in Kharkov. In Odessa, bloody riots broke out and dashed hopes of any pro-Russian turn, while in Zaporozhye and several other places, members of Russian diversion groups were arrested before they even started their operations. Due to this turn of events, Russia, despite quite advanced preparations at the beginning of April 2014, decided not to enter Ukraine by force, but only to supply the “separatists” with weapons and support them by allowing its own special forces and intelligence to participate. The decision on the semi-secret intervention had been made only at the moment when the “rebellion” was almost completely defeated by Ukrainian forces (end of August 2014). In result of these actions the two separatist republics – Donetsk and Lugansk remained separated from Kiev, Crimea fell under occupation, and the conflict in eastern Ukraine is still smoldering.

Despite this, the threat of a Russian military intervention against Ukraine has not completely disappeared. As indicated above, Russia is constantly striving to develop its own offensive military potential, and new units at the divisional and army levels are being established primarily near the border with Ukraine. First of all, new armored and mechanized formations are in the making, as well as airborne troops, and the already existing ones are re-equipped with more modern equipment (for example, armored units receive modernized tanks, such as the T-72B3, and missile regiments – Iskander-type sets). Russia is also expanding its capabilities in the occupied Crimea, as both new military installations and new units (airborne and Marine infantry) are being deployed there.

With regard to military projects carrying potential risks of a military nature, the Zapad-17 exercises should be mentioned first. Their scale, in terms of the number of units involved (especially those coming from the depths of Russia, including the Central Military District) was unprecedented. Another such concentration of forces, albeit on a smaller scale, took place at the turn of March and April 2021. It was linked – and rightly so – to Zapad-21, although, contrary to the opinions of some commentators, it did not pose a direct threat of large-scale military action against Ukraine. Actually, some of the units that arrived near the borders of Ukraine at that time, later took part in these maneuvers, which, it is worth noting, were smaller in scale than those in 2017. As was the case in the spring, not all of them returned to their permanent locations after completing their training activities.

The actions of Russia – both those in the spring of 2021, and those linked to the migration crisis created artificially by the Belarusian government, as well as those expected in the coming weeks and months, should be considered as part of one and the same puzzle. It is highly probable that Russia is acting according to a simple and tried and tested scheme: to create a crisis situation and a state of tension, and then propose its own solution and act as a mediator (Moscow is already acting this role as part of the Minsk negotiation process to resolve the conflict in Donbas, which, as is known, it provoked itself).

Unfortunately, it is Moscow that imposes the rules in this “game”. Also with regard to the use of military force or the potential threat of its use. There is no other way to reduce this risk, than to take similar measures in response to the pressure from Russia. This can be done via such instruments as a stable presence of NATO forces in north-eastern Poland, as well as in Lithuania, Latvia and Estonia. In the context of the current crisis on the Polish-Belarusian border, a similar role was played by the training projects implemented in Poland, among others, by the 12th Mechanized Division (exercises at the training ground in Nowa Dęba at the end of September this year), as well as the rapid transfer of forces of the 10th Armored Cavalry Brigade from Świętoszów to Biała Podlaska at the end of October this year (one could infer from the media narrative that this latest episode, in particular, was a surprise for the Belarusian side).

The question of whether Russia will actually start an offensive against Ukraine remains open for now. Of course, Russia’s potential is several times greater than Ukraine’s, and besides Kiev cannot count on military assistance – after all, it is not a member of NATO or any other military alliance, and guarantees such as the Budapest memorandum, as has been exposed, do not guarantee anything. Despite this, the armed forces of Ukraine present a significant potential in terms of their ability to repel a Russian invasion, even on a large scale – and certainly significantly larger than the one in the first half of 2014, when, as we remember, Russia, despite a high degree of readiness and a much more favorable than currently ratio of forces, did not decide on a large-scale option. At this point (although this may change in the next few to several weeks), the most likely scenario is that Russia will be building an atmosphere of imminent conflict, only to de-escalate tensions at a crucial moment in order to obtain certain benefits. The outcome of this precarious “war of nerves” will also depend on the position of EU member states, especially France and Germany. So far, the freezing of the Nord Stream 2 pipeline certification process seems to be contributing to building a message about a firm stance against Moscow’s actions.