Zielińska: Poland could be a regional leader in climate policy (INTERVIEW) 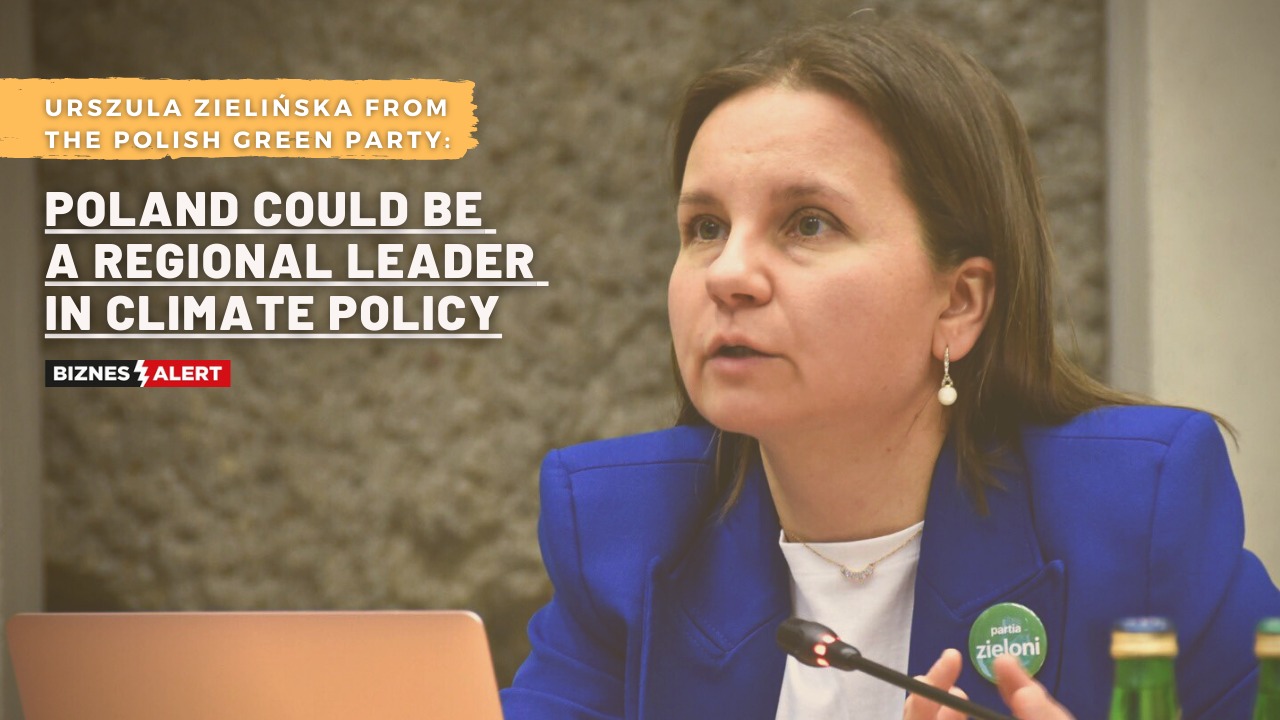 I would like Poland to take part in the climate summit as a leader of Central and Eastern Europe. A leader in decarbonisation, innovation and equitable transformation. As a large country, which has always been at the forefront of changes in the region, we have such opportunities and such potential, says Green Party MP Urszula Zielińska in an interview with BiznesAlert.pl.

BiznesAlert.pl: Do you think that the pessimistic mood around COP26 is justified?

Urszula Zielińska: Yes, it is partly justified, because the COP26 summit is not attended by the presidents of China and Russia. China and Russia are among the top five biggest producers of greenhouse gases. The Middle Kingdom is responsible for almost 30 percent of CO2 emissions. Unfortunately, their absence from Glasgow is a reason for pessimism, because we cannot engage in a dialogue with them. On the other hand, there has also been positive news, such as the agreement to halt global deforestation. I myself have high hopes for the climate summit in Glasgow, although at the same time I am skeptical. Even the British Prime Minister Boris Johnson warned a few days ago that the summit could fail, although until then he had been rather optimistic.

What should happen to make COP26 a success?

First of all, it would be necessary to adopt national goals that will be consistent with science and will stop the increase in the average temperature on Earth below 1.5 degrees Celsius , as agreed in the Paris Agreement. The Paris Agreement scenario calls for a 65% reduction in emissions by 2030 (compared to 1990) and for net zero emissions by 2040. This is the easiest to remember, but not the easiest to implement, way to stop the climate crisis.

What do you think about the speech of Prime Minister Mateusz Morawiecki during COP?

It was interesting that Prime Minister Morawiecki boasted about European Union’s climate ambitions. That was new. I am glad that the Prime Minister has finally recognised that the EU efforts are commendable (laughter). Europe has a rather ambitious goal to reduce its gas emissions by 55 percent by 2030 and become the first climate-neutral continent. That’s what the Prime Minister bragged about. However, he did not give any specifics on what he and his government will do to bring Poland closer to achieving these goals. And the facts are ruthless. Poland has neither an economic decarbonisation plan, nor even an energy decarbonisation plan. In addition, the government does not have a detailed plan for achieving the Paris Agreement goals. Other countries have laws on the basis of which they regulate and monitor the maximum emission ceilings for subsequent years. Poland has neither such regulations, nor a clear plan to achieve climate neutrality. The Polish government, as well as other EU countries, was obliged to draft the so-called “National Energy and Climate Plan 2021-2050 – Long-Term Strategy” by 1 January 2020. It’s been almost two years since that deadline, but Poland has still not submitted the plan to the European Commission. According to the only document that the government has – the “Energy Policy of Poland until 2040”, our economy will still be based on coal in some part until 2040. Prime Minister Morawiecki also spoke on Monday about a fair transition, but on Friday his party had rejected an amendment to the law on the operation of coal mining, which guaranteed equal access to one-off severance payments for all miners subject to mine decommissioning. Today, not all miners have access to such severance allowances. The Prime Minister also talked about developing renewable energy and promised 300 thousand new jobs in the sector. Meanwhile, the development of wind energy was blocked by the Law and Justice government in 2016, the development of solar energy will be seriously slowed down by last week’s new billing rules act, and as for new jobs – we do not know exactly what the plan is. In summary, Prime Minister Morawiecki’s speech was full of empty promises without specifics, and his declarations contradicted the real actions of his government.

What, then, should be the role of Poland in international climate policy?

I would like Poland to take part in the climate summit as a leader of Central and Eastern Europe. A leader in decarbonisation, innovation and equitable transformation. As a large country, which has always been at the forefront of change in the region, we have such opportunities and such potential. Poland could, together with the V4 countries, negotiate with the European Commission support for our decarbonisation plan and a concrete plan for investment in new sectors of the economy. I wish it was happening. I hope that’s what we’ll be doing soon.