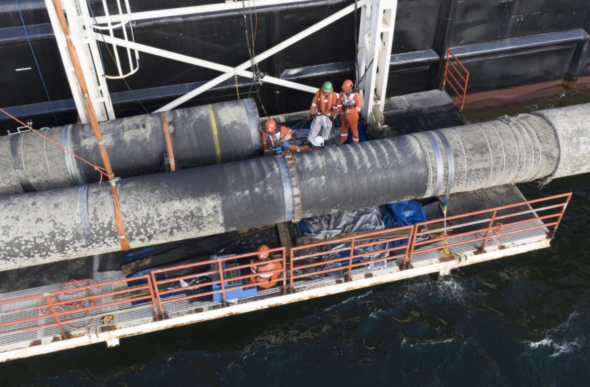 On the 10th of June, the Nord Stream 2 AG company announced it had completed the so-called “golden weld” on the B line of the Nord Stream 2 gas pipeline. This means 1234 km of one of the pipe’s strings now constitutes an integral whole. However, the operational launch of even one line will not take place as quickly as Gazprom claims – Mariusz Marszałkowski, editor at BiznesAlert.pl, writes.

What is the “golden weld”?

The construction of Nord Stream 2, just like Nord Stream 1, was split into a few stages where different pipe-laying vessels were used. In order for the separate sections to become a complete pipeline, they need to be connected. Three “golden welds” were done on each of the two strings of the pipe – two in German waters and one in Russian waters.

Contrary to the underwater tie-in (UDTI) method used during the building of the Nord Stream gas pipeline between 2010 and 2012, in case of Nord Stream 2 the investor decided to use the golden weld method called the above water tie-in (AWTI). It involves a different method of cleaning the inside of the pipes before the gas pipeline is filled with gas. In the first Nord Stream pipeline a “wet” method was used, which means the pipes were cleaned with water; whereas in case of Nord Stream 2 the “dry” method will be applied and the pipes will be cleaned with pressurized nitrogen. The below video presents how two pipe sections are connected thanks to the UDTI method, used during the construction of the first Nord Stream.

To connect the pipes by using the AWTI method two sections of the gas pipeline that have been previously laid on the seabed need to be lifted. The process requires special equipment and organization, as well as proper weather conditions.

The final 350 meters of both pipes are covered with a thinner concrete layer – 70 mm (the regular layer is 115 mm thick). This is done to lower the weight of the gas pipeline that will be lifted above the water. It is worth remembering that such a segment has 28 pipe sections, each weighing over 18 tons. 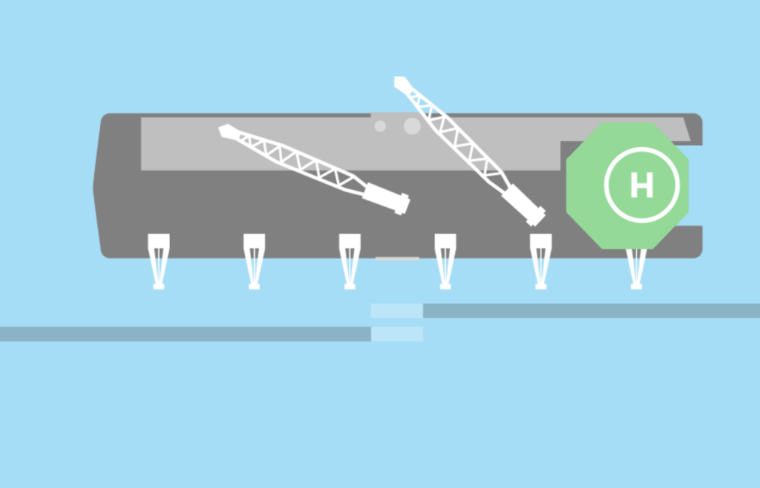 Positioning the vessel over the tips of both parts of the gas pipeline, picture by Nord Stream 2 AG

Once the chambers are installed, the pipe laying vessel (in this case the Fortuna barge), is positioned directly over the two sections of the pipe and six davits installed on the barge are used to lift both pipes over the water. The cranes’ ropes are attached by divers to clamps. Then each section is lifted one after the other.

When both pipes are above the water, their tips are placed on a platform installed on the side of the barge. In reality those are not pipes, but concrete “plugs”, which are used to prevent a mechanical damage or water from entering the pipes. 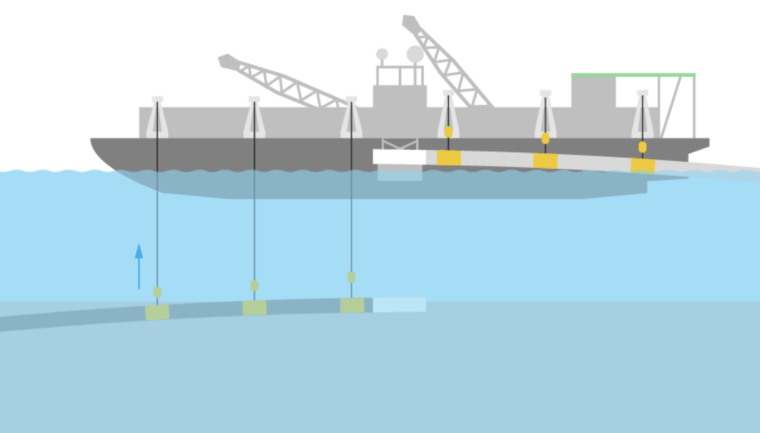 The tips are cut off, the pipes are attached to one another, welded together and then tested. Finally to seal the welded area a Heat Shrink Sleeve is applied. Then the pipe is placed back into the water by the barge and the davits. 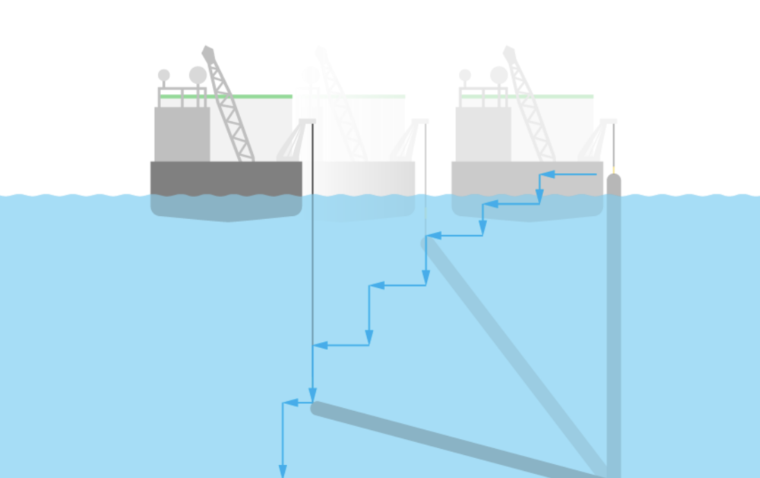 The barge is moving to place the welded pipes on the seabed, picture by Nord Stream 2 AG

Once on the seabed, divers remove the buoyancy chambers and the pipe is examined. Finally, to secure the pipeline in its place rock placement is done.
The entire AWTI operation takes between two and three weeks, depending on the weather conditions at sea.

The below video shows a simulation of the AWTI operation performed by the Fortuna barge.

AWTI is not the final step

However, a successfully conducted “golden weld” operation does not mean gas will soon start flowing via the pipes. In case of Nord Stream 2 it is difficult to tell how advanced the post-laying works are on specific sections of the gas pipeline. For obvious reasons the investor does not share many details on the progress of the work. Interestingly, despite the fact that Russians have been building the pipe on their own since February, so far no state-owned Russian TV has visited the Fortuna barge or the Akademik Cherskiy vessel, which had been a common practice when the construction was done by western companies.
There is no precise data on what sections rock placement has been already performed to stabilize and secure the pipe. Also, there is no information on who and how will bury the sections of the pipe that need to be under the seabed, e.g. in the Danish fragment where 4 km of the pipe need to be buried.

These tasks should be performed immediately after the pipes are laid. Some of those, including rock placement, is done by the many Russian assistance vessels that are present on the Baltic. Since they were not designed to do this kind of work, it may turn out they won’t be able to perform those tasks with the required accuracy. Either way, once all of the post pipe-laying work has been done, the entire gas pipeline will have to be examined. One needs to remember that the pipe has been in construction since May 2018. This means that, among others, the information on the state of the seabed along the pipe needs to be updated, and so does the data on the state of the pipeline itself, and on the areas where it crosses other underwater installations. Usually such tests take two to three weeks to complete.

Certification and gas directive up in the air

After they are done, the pipe needs to be certified. This is where the biggest doubts emerge. In theory, an independent, renowned company needs to perform the certification before the pipe is filled with gas. This involves examining the construction and performing an audit to check whether everything is in line with the issued permits and requirements. Since US sanctions could be imposed on a certification company, it may turn out that despite being completed, the gas pipeline will not find a “rouge” player that will perform the certification. It is possible that this is what Germans and Americans are now talking about. While the sanctions failed to block the construction of the pipe, it may still turn out that without a US permission for its certification, the pipeline may not launch.
If Nord Stream 2 AG manages to certify the gas pipeline, the other remaining preparatory work needed to fill it up with gas will start, this involves, among others, cleaning the inside of both strings and examining the pipe with special pistons, which “travel” along the pipe propelled by air between the compressor station in Ust-Luga and the exit point in Lubmin. The pistons are to detect any micro cracks and examine the state of the pipes from the inside.

The final stage of putting the gas pipeline into service is filling it in with gas. In order for the pipe to transmit the fuel, it needs to have the right pressure inside. This operation will take between 10 and 14 days. However, the question of subjecting the Nord Stream 2 to the updated gas directive is still on the table. This means a separate operator needs to be appointed to manage the 50 km-long pipe section in German waters, which formally are EU territory, where the directive is binding. Most certainly this process will not be undermined by the German regulator BNetzA, but at this point no public information is available on whether Nord Stream 2 AG has taken any action in this regard.

Considering all of these factors, the “golden weld” is an important milestone for the Nord Stream 2 project. However, it does not mean the arduous work is over, and in light of all of the other factors that may still impact the project, the final stretch may prove as difficult as the construction itself. Therefore, December 2021 seems to be the most feasible deadline for the operational launch of the B string of the Nord Stream 2, but it is not the ultimate date. Now, the fight against Nord Stream 2 is moving from the Baltic Sea to the offices of diplomats, politicians and officials, not just in Europe, but also in Washington. It is worth remembering this. The German Chancellor Angela Merkel definitely remembers this, which is why she is going to visit the US President Joe Biden on the 15th of July.

Schmitt: Final USA sanctions will stop Nord Stream 2 (INTERVIEW)
GAS Nord Stream 2
– Moscow tries to project a false sense of Nord Stream 2 momentum ahead of what are likely the final sanctions actions that the US Congress […]
More