Navikas: Lithuania will share its Independence FSRU with Poland (INTERVIEW) 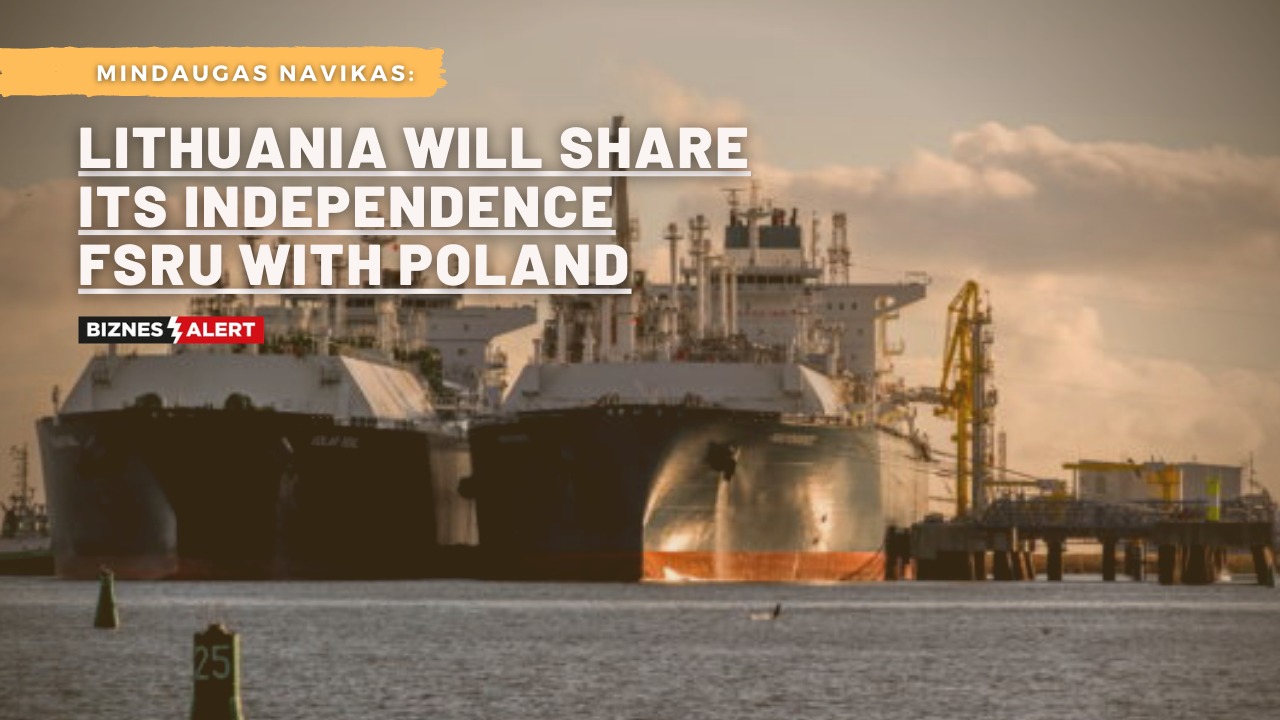 The construction of the GIPL gas pipeline with Poland will become an important link connecting gas supply points and pipelines in the Baltic region with rest continental Europe, including countries such as Ukraine – states Mindaugas Navikas, Chief Sales Officer of Klaipedos Nafta. – A larger breakthrough can be seen only in Poland – he adds.

BiznesAlert.com: What is the role of Independence FSRU in wider Central and Eastern European energy security?

The supply flexibility, price transparency and independence from a single supplier provided by the infrastructure in Klaipėda are becoming important factors for the whole region. The import of natural gas through Klaipėda LNG terminal has surpassed the gas imported by pipelines.  In certain periods of year 2020-2021, 68% and more of natural gas supplied to the natural gas grid were imported through the LNG terminal.  In the first quarter of 2021, 3.9 TWh of gas or 44% was supplied from Klaipeda LNG terminal for consumers in Lithuania, the Baltic States and Finland. This is a significant amount, which shows that LNG terminal in Klaipėda works for the benefit of the whole region and is capable to ensure both energy security and access to world LNG market prices. In the autumn of 2020 Lithuania had doubled its natural gas exports to neighbouring countries – using the well-developed Lithuanian gas transmission infrastructure, twice as much gas as last year was transferred to the Baltic States and Finland, (7.8 TWh). This growth was significantly influenced by the launch of the Estonian-Finnish gas connection Balticconector. From 1st January 2020, prices on the Finnish gas exchange approached the prices in the Baltic States, although a couple of months before the start of the connection, the differences amounted to as much as EUR 10 per MWh. The correlation between the European TTF index and the Finnish natural gas price started immediately after the liberalization of the market and access to the Baltic infrastructure. The construction of the GIPL gas pipeline with Poland will become an important link connecting gas supply points and pipelines in the Baltic region with rest continental Europe, including countries such as Ukraine.

What are the business perspectives of FSRU in the context of natural gas supplies and small-scale LNG projects?

Klaipeda LNG terminal is already among the most efficient terminals in Europe. It is increasingly used by Latvian and Estonian gas suppliers. This year, the activities of Klaipėda LNG terminal will be more intensive than ever – during capacity allocation procedure for the next gas year (starting 1st October 2021 until 30th September 2022), the largest number of capacities in the entire history of the LNG terminal was ordered. Not only the existing customers, but also the Norwegian energy company Equinor, which is planning to support its operations in the Baltic Sea region, have decided in advance to use the services and benefits of the LNG terminal. We’re happy that KN’s goals of increasing the competitiveness of the LNG terminal in the region, strengthening cooperation with existing and potential customers, and offering flexible technological and planning solutions are now bearing fruits and attracting new strategic partners.  And with the growing demand for LNG in the transport, shipping and industrial sectors, the possibilities of the large scale and small scale LNG terminals’ utilisation are projected to increase and open new business opportunities. According to McKinsey & Company, the global gas market has grown by 5.3% in recent years and is expected to grow by 0.9% annually until 2035. The LNG segment is considered to be very promising – Its growth is forecasted to be 3.5% per year by 2035. LNG also has an important role to play in the transition to a climate-neutral economy by 2050. According to the European Commission, it is the most economically viable fuel for the transition to green energy. LNG reloading station, which started operating in Klaipėda in 2017, has also enabled the development of a small-scale LNG market – Bunkering ships with LNG, transporting by tank trucks to regions remote from the natural gas network. However, so far the potential for LNG use in the Baltic States remains relatively low. LNG bunkering takes place only in Klaipeda and Tallinn, the LNG refuelling point for transport operates only in Estonia, a larger breakthrough can be seen only in Poland. Lithuania is also laying the foundations for the infrastructure of LNG heavy road transport refuelling points. In the next 2-3 years at least 4 LNG filling points will be operational in Lithuania, as the state provides subsidies for the establishment of such infrastructure.

What would be the role of FSRU after Poland-Lithuania Gas Interconnection is ready?

As mentioned above, the construction of the GIPL gas pipeline with Poland will become an important link connecting gas supply points and pipelines in the Baltic region with rest continental Europe, including countries such as Ukraine. GIPL interconnection and the increasing natural gas consumption in Poland is raising a significant interest in Klaipėda LNG terminal from various gas market participants in the region and outside the region. We believe that the interconnection will create an added value to both markets across the border, as it will increase diversification of the market. The LNG reloading station in Klaipėda gained a stronger foundation when in 2020 its sole user became the Polish company PGNiG. KN sees Poland as an open and high-potential market, as there are still many customers in Poland that are distant from the natural gas network, and the network of LNG filling points is expanding. In addition, Poland aims to reduce the production of electricity from coal from 80% to 37-56% by 2030, so the demand for natural gas supply will increase. In 2018, the Seimas of the Republic of Lithuania approved the National Energy Independence Strategy and the Law on the Liquefied Natural Gas Terminal which altogether envisages long-term operation of the Klaipėda LNG terminal until 2044. When the current contract for the lease of the FSRU ‘Independence’ with the Norwegian ‘Hoegh LNG’ expires, Lithuania will have to acquire and own this type of vessel that meets the country’s energy security and natural gas competitiveness aspirations. The KN is obliged to complete this project by the end of 2024 and to secure the supply of natural gas by the most cost-effective technological solution until 2044. It is planned to call an international tender for the FSRU in July. We had several market consultations and market research about the FSRU market and possibilities to acquire FSRU.

Will Estonia stop the exodus of the Baltic states?
Energy
Next month, an agreement will be reached on the synchronization of the power systems of the Baltic States with the continental Europe system […]
More