Thousands of protesters, army deployed on the streets, state of emergency and the government fleeing the capital. One could observe such scenes in Quito, the capital of Ecuador, in early September. The reason of fortnight-long unrests was the decision of Lenin Moreno, the president, to get rid of fuel subsidies – which in turn was forced upon him by the country’s economic woes – writes Marcel Bielówka, a collaborator of BiznesAlert.pl.

Though it goes without saying that access to electric power, heating and transport fuels underlies the wellbeing of modern societies, it is still worth being quantified. According to a study by the Interamerican Development Bank (IADB), an average household in the Latin America and Caribbean (LAC) region spends 6% of its budget on electricity and natural gas. This share is, however, not constant across the whole population. While the goods constitute nearly a tenth of total expenditure of the poorest quantile of society, the richest 20% spend less than 3.5% on them. As it turns out, the Ecuadoreans are among those least burdened by electricity bills, chiefly owing to subsidies. To compare, Statistics Poland revealed that spending on power and gas constitutes around 6% of Polish households’ expenditure as well.

As far as transport fuels are concerned, a curious pattern emerges. In general, their share in household spending was less than 3% and progressive (the poorest 20% spent only 1.2% of their budgets on transport fuels, while for the richest the figure stood at 4.7%). However, once zero reported expenditure was excluded, the percentage for the lowest quintile surged to above 10%, while for the top quantile rose by no more than 3 percentage points. This might indicate that few of less affluent Latin Americans own cars – but when they do, they must dedicate a significant part of household budget to them. 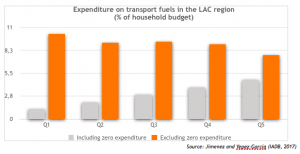 Fuel and power subsidies are, obviously, not endemic to Ecuador. As the employees of the International Monetary Fund (IMF) showed in 2015, a majority of LAC countries, including Argentina, Bolivia and Mexico, had some form of them in place. These forms of social transfer have also become a part of economic tradition is some of these states. For instance, in Argentina and Ecuador they were introduced in the seventies – and have weighed on their governments’ budgets ever since. In the case of the smaller of the two, over the 40 years subsidies have cost the state $60 bn, including $1.4 bn – equivalent to 5% of total government spending – last year, as Bloomberg and The Economist notice. Argentinean programmes were a little less daunting – according to the OECD, energy subsidies have cost the country 3.5% of GDP in 2015.

However, problems do not end there. According to both The Economist and the paper of C. Gould of Columbia University et al., Ecuadorean transfers helped foster fuel smuggling to neighbouring Peru and Colombia, where there are no artificial price distortions. Furthermore, as the IADB and CIPPEC, an Argentinean think-tank, point out, some of the subsidies benefit the better-off. This contradicts the very idea of social transfers, which should equalise the living standards between the rich and the poor.

Despite indisputable shortcomings of the subsidies, the LAC countries have hitherto withheld from reforming or disposing of them – chiefly because they were wildly popular with the voters. In Argentina and Ecuador, this logic was only changed by economic downturn, caused by, among others, overregulation, excessive government spending and a decline in crude prices. In the former country, ridding the country of subsidies was one of the campaign points of then-president hopeful, Mauricio Macri, who in 2015 became the head of state, while in the latter it was an emergency measure to flip the country’s fiscal deficit into a surplus. Initial conditions notwithstanding, both countries turned to IMF for loans as their economies were crumbling.

The presidents of both countries – Mr Macri and Lenin Moreno of Ecuador – took the courage to do away with the subsidies, and have both paid dearly for their attempts. In Ecuador mass protests broke out, demonstrators stormed the parliament and the taxi drivers blocked the streets. Seven people died. The president and the government decided to flee Quito and take shelter in Guayaquil, the second-biggest city of the country, and to impose emergency state. However, after a dozen of days of unrest, he decided to re-establish the subsidies, which, according to the Financial Times, calls into question Ecuador’s ability to fulfil the conditions for receiving the IMF’s loan.

But Mr Macri’s fate was even less fortunate. According to government’s forecasts, the removal of subsidies was to result in fourfold increase in the prices of power and gas. However, as noted by the BBC, the spikes finally amounted to even 900% each. High inflation, fused with capital flee and ensuing peso’s depreciation led the country to a verge of crisis, and hence to huge popular discontent. On October 27th this discontent voted Mr Macri out of the office, in which he will be replaced by Alberto Fernandez, a socialist.

Attempts to reduce cherished social transfers or impose new taxes usually lead to social unrests, as the gilets jaunes movement in France showed. However in Argentina and Ecuador the abrupt reduction of subsidies was an additional factor. The citizens were offered no solutions to ease the transition period. Even though Mr Macri encouraged local governments to reduce local energy taxes and Mr Moreno finally suggested introduction of safety net for the worst-off, these efforts were too little and came too late.

Was there another solution? Probably yes. As mentioned, the fuel and power subsidies in Argentina and Ecuador were not effective, mostly benefiting the better-off. However, the IADB showed that, at least in the case of Ecuador, by means of phasing out the subsidies and amplifying other poverty-alleviation programmes, the government could have improved the well-being of the poorest quantile of the society while saving funds. The proposals included substituting gas subsidies for targeted gas vouchers, among others.

The current woes of Argentina and Ecuador provide insight into attempts of removal of social transfers, problems which might ensue and measures that countries take (or fail to take) to mitigate the adverse impact on their citizens. Hopefully, the governments that are currently amplifying their social programmes, in times of worse prosperity will learn from the mistakes of their Latin American colleagues.

100 percent of the energy in the stock market will slow, but not stop the price increase
Energy
The Ministry of Energy will propose a draft legislative amendment introducing 100 percent of the exchange obligation for electricity, excluding […]
More